Vaping refers to the use of e-cigarettes, or vaporizers, often as an alternative to traditional cigarettes. Read the overview below to gain an understanding of vaping and explore the previews of other articles examining health concerns and other aspects of vaping.

Vaping is inhaling the steam or vapor created by any type of electronic "smoking" device. The vapor may contain nicotine as well as other substances, flavors, and chemicals.

In 2018, researchers estimated that nearly 10.8 million people in the United States were vaping. According to the Centers for Disease Control and Prevention (CDC), 3.6 million of the people vaping were middle and high school students. In 2014, vaping became the most common form of tobacco use among people under 25 years of age. While e-cigarettes may be an effective way to stop smoking traditional cigarettes, the CDC states that vaping is unsafe for youth, young adults, pregnant women, or adults who do not currently use tobacco products.

Vaping began in 2007 with the introduction of the first electronic cigarette (e-cigarette) as a form of smoking cessation therapy. These e-cigarettes were available by prescription only, and several brands remain a popular prescription option to help quit smoking cigarettes.

The first e-cigarette was patented in 1965. In 2007, Chinese manufacturer Hon Lik introduced the first version of modern e-cigarettes. As of 2019 there were over 460 different brands on the market and thousands of blends of vaping liquids created by local vaping shops.

There are many ways to vape, but all the instruments have the same basic components and work in the same way: they heat a liquid until it becomes a vapor or aerosol that a person can inhale.

The parts of any vaping machine include:

According to CDC, most e-cigarettes produce fewer toxic chemicals than regular cigarettes, which contain over 7,000 chemicals, and for this reason, e-cigarettes may be an effective way to stop smoking conventional cigarettes. However, vaping aerosol has risks, too. The inhaled vapor usually includes nicotine and other chemicals such as carbonyl compounds, volatile organic compounds (VOCs), solvents, heavy metals, and cancer-causing agents. In fact, the liquid for e-cigarettes can cause nicotine poisoning and even death if swallowed.

The surgeon general of the United States reports that vaping has risks, especially for younger people. A 2014 report from the Office of the Surgeon General noted risks from vaping, including:

In 2019, eight people died in the United States from vaping, and more than 500 people who used various forms of vaping, primarily adolescents and young adults, from at least 15 states were hospitalized with lung injuries. Most patients tested negative for respiratory illness, and all patients used vaping products. The CDC is investigating the cause of the lung injuries, illnesses, and deaths, but it has not yet been identified. Several retailers suspended the sale of vaping products, and lawmakers considered tighter regulations for vaping.

Vaping, and the appliances used for vaping, go by many names:

When first introduced, e-cigarettes required a prescription to purchase and were unavailable to minors; however, since 2007, when a consumer version was introduced, vaping became a cottage industry with shops that mix their own blends of vaping liquids. Many of these products included flavors, packaging, and styles specifically designed to appeal to teens and children. But because e-cigarettes do not use actual tobacco, the FDA had limited power to manage sales.

In 2016, the Food and Drug Administration passed new rules that add vaping liquids and vaping products to the regulations for tobacco products. Called "Deeming Regulations," these rules require anyone who mixes vaping liquids or makes or modifies vaping equipment to follow the same rules as other tobacco manufacturers and retailers. They must receive approval from the FDA before they can make or sell liquid or devices that deliver nicotine. These rules will be fully implemented in 2022.

Although vaping and e-cigarettes began as a way to stop smoking traditional cigarettes, and was available only by prescription to adults, the introduction in 2007 of modern e-cigarettes made vaping inexpensive and easily available. Several studies have found that, rather than replacing combustible cigarettes, vapes have been added to many people's smoking habits, with many smokers using both. For young people, vaping has been found to pose serious risks such as addiction, exposure to toxic ingredients, and a much higher likelihood of smoking traditional cigarettes. For these and other reasons, both the CDC and the surgeon general recommend that people under the age of 25 avoid vaping and vaping products.

"E-Cigarette Use Among Youth and Young Adults: A Report of the Surgeon General Executive Summary." Centers for Disease Control and Prevention. 2016. https://e-cigarettes.surgeongeneral.gov/documents/2016_SGR_Exec_Summ_508.pdf (accessed August 17, 2019).

Coming out against e-cigarettes poses a challenge for public health officials, since vaping is perceived as less harmful than regular cigarettes.

This article provides an examination of five myths surrounding the vaping epidemic and information for understanding the potentially harmful effects of vaping, in general.

Vaping is more popular among young adults than older Americans according to polling results. Vaping safety is a concern for parents.

Illnesses and Deaths in the United States Related to Vaping, CDC Totals as of early October 2019 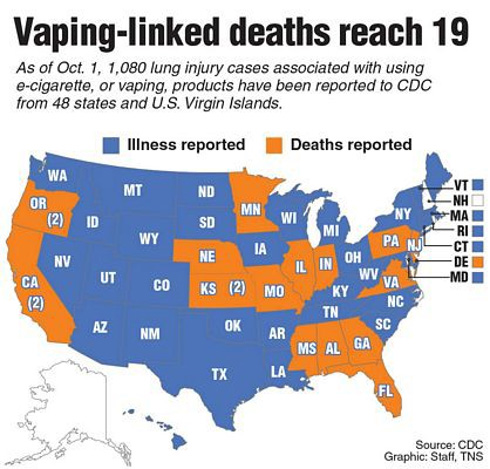 Looking for information on other topics?